Use for advanced treatment of strains, sprains and bruising of ligaments, joints and tendons. physicool™ combines cooling with compression to quickly reduce swelling and pain. physicool™ is a 100% cotton Bandage with its own natural elasticity to provide support and compression. The physicool™ Bandage comes in small and large size and is pre-soaked in a specially formulated liquid that rapidly evaporates once applied to the injured area, causing the cooling effect. The physicool™ Bandage fastens with a grippy strap.

Research shows that physicool™ applied to the lower leg area resulted in reduction of temperature by 7°C in 10 minutes. In total a measurement of 10°C was recorded as the temperature continued to fall over a 15 minute period. Cooling lasts for up to 2 hours and area continued to stay cold.

Works by similar principle to refrigeration by extracting heat, does not try to put cold onto the injury.

Once the Coolant has evaporated, the physicool™ Bandage can be washed and re-used by adding enough ready-mixed Coolant to make the Bandage damp. Just place in the re-sealable pouch until needed again. The Coolant is supplied in correct concentration for recharging the bandage and is non-irritant to skin. physicool™ does not rely on ice or require refrigeration, is not messy, needs no mixing and has a pleasant menthol aroma.

Remove the physicool™ Bandage from its re-sealable packet and wrap around the injured area.
Fasten the bandage with the special attached 'self grip' strap.
Do not cover the bandage - allow air to circulate around it, or performance will be impaired.
Remove bandage when cooling effect has stopped.
Recharge with physicool™ Coolant, ready for next use.

Suitable to use anywhere, anytime as there is no need for ice or refrigeration. physicool™ is an essential part of any first aid kit at work, home or when playing sport. Providing instant cooling and compression - essential for recovery of sprains and strains - physicool™ works to quickly reduce inflammation and bruising of muscles, tendons and ligaments and has been developed for immediate application. Suitable to use over cuts and grazes. 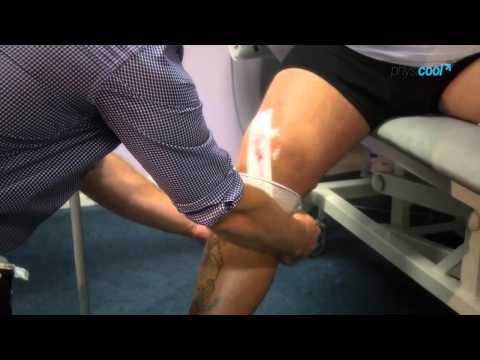 Take a look at this short video to find out.

How to treat a sprained ankle with Physicool's cooling bandage 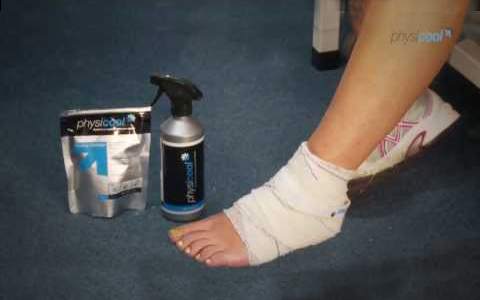 How to apply a Physicool cooling bandage to an injured foot - sprained ankle.

Take a look at this short video to find out.

This email address is being protected from spambots. You need JavaScript enabled to view it.